Small business Networking, IT and Managed services for Barrie and the surrounding area.

For over 10 years, ACT360 has served businesses in the Barrie area. We have experience implementing complex IT solutions for a variety of industries and verticals.

It’s amazing what the right IT strategy, the right tools, and people alignment can do for an organization. Here are some success stories from our clients.

how we help / WHO work with

Managed IT - 9 areas of focus

From our founding in 2009 as Affordable Computer Techs to today, we’re here to help you leverage your technology to work more productively, collaborate more effectively, and drive business value.

why us
About us

From our founding in 2009 as Affordable Computer Techs to today, we’re here to help you leverage your technology to work more productively, collaborate more effectively, and drive business value.

At the end of the day, we want you to end technology worries so you can get back to serving your customers, managing your team, and growing your business. 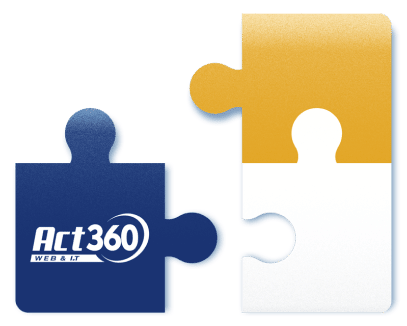 What if you could...

Stop Worrying
about your website, software licenses, antivirus updates, hardware procurement and more because you knew it was ALL handled by an expert team

SCALE your business
thanks to cost savings and profit generation resulting from improved IT management, productivity, and applications
EASE the burden
of making technical decisions and pass the IT strategy to a “Fractional CIO” (Virtual CIO) whose expertise spans industries

We’re here to help.
Click to explore how we can help your business succeed.

Meet the Barrie IT Team

We’re a small, laid-back group of tech experts with experience in hardware, software, networking, and technology strategy. Learn a little more about us below and click here to explore our job openings.

Owner & Partner
Specialties: Front-end Development, WordPress, Drupal
Adam is the President and a Partner at ACT360. His experience is in helping take business ideas and goals and turning them into websites.

Adam received his Web Design, Animation & Design diploma from Georgian College and he grew beyond what he has learned from Georgian due to his hands-on experience. Specializing in business/website vision and SEO (Search Engine Optimization) strategy, and overall user experience.

IT Director & Partner
Specialty:  Creating IT solutions
Jeffrey excels at helping clients transfer there IT from being a cost area, into a business accesset that helps them to grow.

Lead Developer & Partner
Specialty: Backend web development
Adan is the Web Director & Partner of our website and is the senior backend developer at ACT360. He is responsible for all site build strategy and execution. His experience with ACT360 from the beginning gives him the unparalleled foundation to turn complex problems into simple solutions. He has a certificate from Georgian College for Computer Programming.

Front End Developer
Specialties: Front-End Development, User Experience, UI/UX Design, Graphic Design, Animation
Utilizing his creativity, Jordan enjoys meeting with clients, where he listens to their vision, design ideas, and preferences. By taking our client’s feedback, he can transform your vision into a modern website that is easy to use. Jordan has a graphic design advanced diploma from Fanshawe College and an Interactive Media Design diploma from Fanshawe College.

Web Developer
Specialties: Full stack web development
Nathan is a Web Developer who’s been on the team for over a decade. He says, “I’m a fan of problem solving and accessible tech that makes life easier.” Nathan received his Diploma in Web Animation and Design with Honors. When he’s not working to make responsive and accessible websites, he’s spending time with friends, cooking, and keeping up with web trends.

Client Service Coordinator
Specialties: Custom Service
Heather is one of ACT360’s newest hires, joining the team in 2021 as Client Service Coordinator. She’s a natural at organizing people and projects, and has served as a coordinator for many years. She loves solving problems with customers and helping them feel valued. When she’s not serving as the IT team’s point of content, she collects stamps. She says, “they’re little pieces of art with a story to tell. I have thousands of stamps from all over the world.”

In 2008, ACT360 founder Adam Bowles finished high school and wanted to put his interest in technology to work, so he posted an ad for consumer computer repair. He spent 2 years serving local companies out of his basement before applying to Georgia College’s “WBAN” program in 2009.

While attending school, he found that there were many freelance jobs on the school website, and applied for and won all of them. He was so busy during the first coop period that he worked through it himself; by the second coop period, he was hiring other students.

In Adam’s second year of business, Adam hired Jeffrey Bowles to take over the IT side and the company’s third employee, Adan Silva came on a year later. Nathan, another college peer, joined for a co-op, and now 10 years later is back working for ACT360.

In 2016, we rebranded Affordable Computer Techs to ACT360, at which point we introduced our MSP program and strategic IT services beyond mere “break fix” to help mid-sized companies, government agencies, and schools with their technology.

Ready to start the conversation?